The human eye does a great job of compensating for the dark and light areas in a high contrast scene. When these light or dark areas reach the extremes, we need to reach for a flashlight or dark glasses, but for the average high contrast scene, our eyes do a great job of automatically compensating. Today’s digital cameras are getting close to matching this dynamic range of adjustment/compensation, but they still have a long way to go. For example the human eye sees at about 11 f-stops, while digital camera sensors see only about 6 f-stops.

One technique to achieve additional dynamic range in our digital images is to capture a series of photographs at differing exposure levels (exposure bracketing), then combine them into one final High Dynamic Range (HDR) image during post processing. This “combined” image would then contain the best characteristics of the series of images.

When capturing images for HDR processing it’s important to remember the following guidelines:

How many bracketed shots?

How many bracketed shots should you shoot?  Some say 3 to 5, while others say 7 to 9.  The answer really relies on the contrast of the scene you are trying to capture.

Using the sun’s position to determine how may bracketing shots to take.

In this tutorial I’m using a series of images that were taken without a tripod (yes I know, I’m already straying from my guidelines). Because the images were taken in fast succession using the burst mode function of my Nikon D700 they’re still usable—I will however have to align them before processing for HDR.

A total of 5 images were captured, each with 1/3 stop difference.

My post processing steps vary depending on the images I’m working on and the desired result. For example I may use Nikon’s Capture NX2 instead of Lightroom or Photoshop, or I may use HDRsoft’s Photomatix Pro instead of Nik Software’s HDR Efex Pro. Each of these tools have there benefits and caveats, but the bottom line is having flexibility and the tools you need to create the image your looking for.

To create the HDR image shown at the top of this page, I processed my 5 RAW images in Lightroom 3 by first applying a custom DNG profile created using X-Rite Photo’s ColorChecker Passport. I then applied lens correction and sharpening. I didn’t need to make any other image modifications, however you may need to make other adjustments to your images.

Any sensor spots, noise or chromatic aberrations (CA) will be amplified during the HDR process, so it’s best to fix these problems before processing for HDR.

In Bridge select all of the images in the bracketed series, and select the option Tools > Photoshop > Load Files into Photoshop Layers.

Once the images were processed in Lightroom, the hand-held images needed to be aligned. There’s a great Photoshop script called StackAlignCrop available on the Digital Outback Photo site that I use and recommend.

Prepare to align the images by exiting Lightroom and opening Adobe Bridge. In Bridge select all of the images in the bracketed series, and select the option Tools > Photoshop > Load Files into Photoshop Layers.

Once Photoshop settles down after opening all of the images as layers, confirm all layers are selected by using the keyboard shortcut Cmd+Option+A (PC: Ctrl+Alt+A) (or click on the top layer and Shift+Click on the bottom layer). Next select File > Scripts > StackAlignCrop. I recommend you don’t make any other changes to the images—just open them as layers, then immediately run the script.

Once the StackAlignCrop script is done processing the images, save the individual layers as separate files using File > Scripts > Export Layers to Files. In the export dialog box select a temporary location to store the aligned images—use the default file prefix or select one of your own, and select PSD for File Type (or use TIFF if you want). Select the options for “Include ICC Profile” and “Maximize Compatibility.” Click “Run” to begin the export process.

Close the multi-layer file in Photoshop, selecting “Don’t Save” in the exit dialog box.

Depending on the images you are working on, you will select some or all of the following options:

Whenever possible I always work with Smart Objects because of their flexibility, so select the option to “Open as Smart Object.”

Because we already aligned the images with the StackAlignCrop script, you shouldn’t need to align the images, so deselect the option for “Alignment.”

Because there may have been a slight breeze when the photographs were taken, select the option for “Ghost Reduction Method.” I usually start with the settings of “Adaptive” and “Medium” as shown in the illustration below.

Open as a Smart Object

Checking this box enables the alignment algorithm and causes HDR Efex Pro to attempt to align images where the camera may have shifted during image capture.

Designed for image series that have large objects moving within the image, such as people and cars.

Designed for image series in which small objects or textured objects, such as trees, clouds, or water, were moving in the image series.

Because we used the HDR Efex Pro Photoshop plugin instead of the HDR Efex Pro Lightroom plugin, the following dialog box will appear. Select the appropriate EV stepping value, and confirm the EV steps are correct for all images. Click on “OK” once all of your settings are correct.

Once HDR Efex Pro finishes processing the images, the main HDR Efex Pro window opens. Here you can select from a variety of built-in presets, which are a great starting point towards the look you are trying to achieve. For the image in this tutorial, I selected the “Vintage Colors” preset, which can be found under the “Surreal” preset category. While you can make numerous modification in this dialog box, I chose the default setting for the preset and clicked on “OK.”

If you feel you would like to try different HDR settings on your file, you can double-click on the HDR Efex Pro Smart Object in the layers panel (this is the one of the benefits of selecting the option of opening the image as a Smart Object).

You will probably get a Photoshop message notifying you that some filters may not work properly in the converted document depth. This is just telling you that you won’t be able to make any further 32 bit image adjustments once the image is in a mode other than 32 Bits/Channel. Select “OK” to continue.

Another Photoshop dialog box will appear prompting you to either “Merge” or “Don’t Merge” the layers in the Smart Object. Select “Merge” and click on “OK” to continue.

Once the layers are merged, the Photoshop HDR Toning dialog box will appear. To avoid tone mapping the images a second time (HDR Efex Pro already did this), you would typically select the option “Exposure and Gamma” from the “Method” drop down menu. However for this image I intentionally selected the default option of “Local Adaptation.” This is because I found this option gave this particular image some extra “punch.”

A global operator that compresses the dynamic range while preserving image contrast. No options are available for this method.

A global operator that allows you to “Manually adjust the brightness and contrast of the HDR image”.

A global operator that compresses the highlights to fit within the dynamic range of either the 8 or 16 bit output you select. There are no options available for this method.

The Tone Mapping options you would normally select when working with the Nik Software HDR Efex Pro plugin.

The atypical tone mapping selections I used for this image.

At this point I saved the 16 bit image as a Photoshop PSD image using a special naming convention that includes the starting file name and ending file name of the bracketed shots that were merged to HDR. For example if I used the following file names for the HDR merge:

The name I would use for the final HDR image would be:

I highly recommend you select this or a similar naming convention for your final HDR images, because years from now you may need to know exactly which images you used to create the HDR image.

Once the 16 bit image has been saved as a PSD file with the proper naming convention, I began my other post processing tasks by converting the image to a Smart Object. To convert the image to a Smart Object, right-click (or Option+Click) the layer just to the right of the layer name, and select the option “Convert to Smart Object.” I won’t go into too much detail on the other changes I made in Photoshop using the other Nik Software tools, but here’s a brief recap of the other changes:

Capturing multiple exposure images for HDR processing is a great way to increase the dynamic range in your images. HDR images also allow for a wide range of artistic leeway—you can make your HDR images realistic, so they appear more like what the human eye would see, or they can wildly artistic.

14-Day Free Trials from ON1 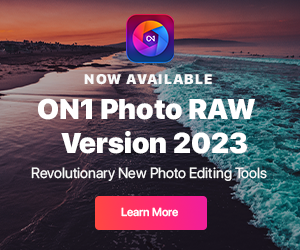